The Great North Wiki
Register
Don't have an account?
Sign In
Advertisement
in: Episodes, 1LBW Episodes, Season 1 Episodes,
and 4 more

"Sexi Moose Adventure" is the broadcast premiere episode of "The Great North".

The Tobin family's plans to celebrate Judy's 16th birthday on the family fishing boat go awry after a moose breaks into the family home.

Beef is shown cutting wood early in the morning. When the other kids ask where Judy is, Beef said she wanted to sleep in for her birthday. Early in the morning, Judy tells her imaginary friend Alanis Morrissette that she got a new job, and she encourages Judy to break free from her father’s nest and go to her new job. In the morning, the family is eating breakfast, but a moose invades their home, and steals some of Judy’s birthday balloons. The moose then attacks the guest cabin and steals some of the artifacts Beef kept of his wife, who left him to be with another man in Pennsylvania. Beef is still saddened by this and pretends she died so he doesn’t have to cope with the truth.

While in the car to get Judy’s gift from the mall, Honeybee tells Wolf she wants to move to the guest cabin, but Wolf tells her that his dad wouldn’t approve. To protect Judy, Wolf distracts his dad by pointing to a plant. Beef then doesn’t like the placement of the mall plant so he moves it. This buys Judy time, but she can’t help but stop at a smoothie store who employs a boy she has a crush on. Unfortunately, the boy doesn’t remember her name.

Beef gets to the Point & Shoot photography studio to get Judy’s gift, which is a photo in a frame of her holding a fish. Alyson, the boss, then proceeds to talk romantically with Beef, but he doesn’t seem to understand what she wants. While they’re leaving, Alyson tells her that she’ll see Judy at work in a few days, to which Beef overhears. He then becomes dizzy.

In the car, Beef is still upset about Judy getting a job behind his back, but they still head off to the docks to finish the last part of Judy’s big day. While Beef is complaining when he has trouble lighting a candle for the cake, Judy snaps and says she quits helping her dad on the docks. So Beef storms off.

Wolf, Honeybee, Moon, Ham, and Judy all rush to find Beef; but there are many tracks on the snow, so each of them split up. Judy ventures on one path and finds her dad, who fell off a small cliff and twisted his ankle. Beef is worried that his daughter is breaking away from him, but Judy reassures that she will always love and support her dad, even if she’s getting a new job. Just then the entire family reunites; but the moose returns to attack them. Moon, wanting to show off his moose riding skills, leaps from a tree and attempts to ride the moose, to which he saves his mom’s bikini before the moose runs away. More comfortable after realizing that Judy’s getting older and more independent, Beef allows her to go to her new job. And he also allows Wolf and Honeybee to move to the guest cabin. Alanis sees all of it and says to herself that their heart-to-heart moment was really "diving into life’s butthole." 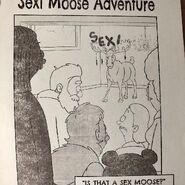 An Intruder Crashes The Party Season 1 Ep. 1 THE GREAT NORTH

Community content is available under CC-BY-SA unless otherwise noted.
Advertisement