Edit
watch 01:36
We're Getting Mutants in the MCU - The Loop
Do you like this video?
Play Sound

Debbie (voiced by Patti Harrison) is the focus of s1e8 Keep Beef-lievin' Adventure where she debuts. 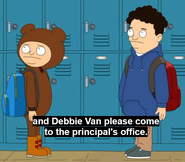 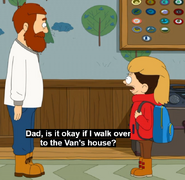 Debbie Gladu is initially what Moon calls her in s1e8, but she is called Debbie Van in s2e17 over the PA by Principal Gibbons, and later Moon asks his father to go to the "Van's house" to visit her.

The surname "Gladu" is pronounced "glah-doo" while "Van" is pronounced like "Vunn". Because the surname Van is of Chinese and Vietnamese origin, she may be of Asian descent. This is further supported by her appearance.

She returns in s2e11 Dances With Wolfs Adventure revealing her dad quit his job to record an album. It is called "Simply Ken" implying her father's name may be Ken.

She bears some resemblance to Becca Tobin.

In "Skidmark Holmes Adventure", Moon said that she's going to Ice Skating Junior Nationals, but she didn't qualify to compete and is only going so she can throw stuff at the people who did.

In s2e17 Dead Moon Walking Adventure she is seen with her mom and a creepy doll. Moon narrates to himself that she is "my friend and my bully".

Debbie threatens to "pee punch" Moon and he tries to bribe her not to do it with $10.12. When this doesn't work (Moon blabbed on too long about seeing her with the doll) and Moon's friend reports her to Pricipal Gibbons, she says she has a crush on Moon to avoid punishment, and then reminds him after that she's still going to punch him a bunch.

Moon talks to Debbie's mom later and finds out she was held back by her mom to repeat kindergarten back when they lived in Death Cliff. She was small and got picked on, so her mom held her back so she'd be bigger than her classmates when they moved to Lone Moose.

Community content is available under CC-BY-SA unless otherwise noted.
Advertisement